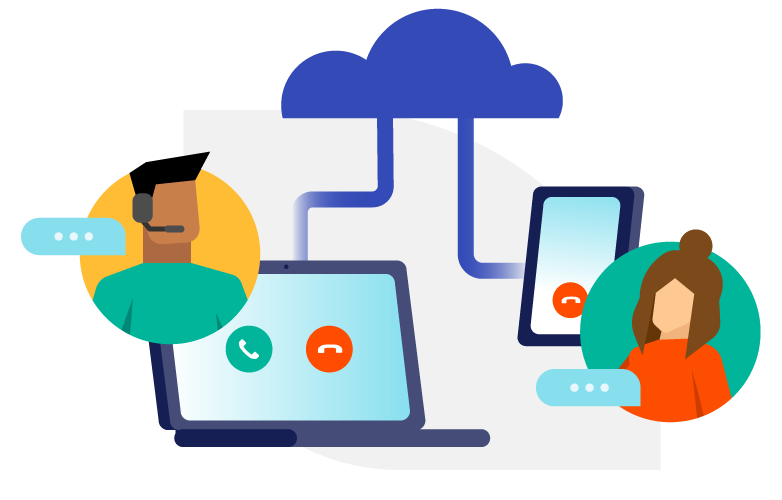 Voice over Internet Protocol (better known as VoIP) is a technology that allows users to make and receive phone calls over the internet. Thanks to the widespread availability of broadband, VoIP is becoming the go-to option for small business owners, privacy-conscious consumers and anyone else who needs an affordable second number.

Whether you’re looking to set up a VoIP number for your business, curious about the advanced features VoIP can offer, or just wondering how it all works—you’ll find the answers in this guide.

VoIP makes it possible to have phone conversations (and send and receive texts) using a broadband connection, rather cellular networks or traditional phone lines. By simply signing up with a VoIP provider, anyone with an internet-connected device can have a fully working phone.

In a nutshell, VoIP technology works by transmitting audio over the internet as small packets of data—but more on that later. Here are 5 perks of using a VoIP number.

1. Any device goes.
VoIP is device-flexible. You can make and take calls from your smartphone, desktop computer, laptop or even an adapter-equipped landline phone.

3. Your area code is up to you.
Most VoIP numbers are 10-digit “local” numbers that aren’t assigned to a specific location—which means you can live and work in Florida and still have a New York area code.

4. It’s like any other number.
To the people you call, your VoIP phone number will look like a regular cell or landline. You can also use this number to send and receive texts, check your voicemail and more.

5. It’s also unlike any other number.
Voicemail-to-text, call recording, and auto-attendant are just a few of the high-tech features you can expect with cloud-based phone service.

To sum up, a VoIP number is a (geographically-flexible) local number you can put to use on your existing smartphone—or any other device. You can expect unlimited domestic calling, standard features like text and voicemail, and advanced tools to help streamline your communications. But you’ll need good internet to make it all work.

How Does VoIP Work?

If you’ve ever had a video chat on Facetime or Messenger, you’ve used VoIP. These communication platforms (and many others) rely on Voice over IP technology to transmit voice and video data over the internet.

Here’s a quick look at how VoIP works behind the scenes.

Voice over Internet Protocol technology (sometimes referred to as internet telephony) was originally developed to help users avoid long distance charges. The goal was to bypass the old telephone system completely, using the internet and a technology called “packet switching.”

Every circuit-switched call requires a continuous connection, from start to finish. The more ground a connection has to cover, the more costly it is to establish and maintain—especially when the endpoint is a country with older infrastructure. Hence, expensive long distance calls.

Instead of using copper lines and two-way circuits, VoIP phone systems use packet switching to transmit voice signals over the internet, like any other piece of data.

Information is divided and compressed into digital data packets that seek the fastest path across a network as circuits become available. With an IP header that tells it where to go (and how to reassemble once there), each packet is semi-autonomous and can travel separately from the rest.

Packet switching is the basis of online data sharing—and it’s also what gives VoIP systems their speed and clarity.

Making a VoIP Call (Behind the Scenes)

While VoIP is an internet-based technology, call recipients do need to be online. Your service provider can route data from your device’s IP address to any existing phone network.

There are a few different communication protocols a VoIP provider can use to facilitate these VoIP-to-any-other-phone connections. The most common is Session Initiation Protocol (often referred to as SIP trunking).

Here’s what happens what you make a VoIP call (in stages):

All this talk of packets and protocols may sound technical and complex (and it is), but the essential takeaway is VoIP technology uses the internet’s power to make voice calls more energy-efficient—and this means cost savings for you.

The quality of your internet connection will have a major impact on the reliability of your VoIP number. If you have dependable high-speed internet at home, at your office, or anywhere else you plan to use your phone line, you’re off to a good start. (We recommend at least 100 kbps upload and download bandwidth per line).

The reliability question also comes down to how quickly your provider can help you with any issues that arise. That’s why we recommend choosing a service that offers a dedicated support number.

We work with Northwest Registered Agent because they’re known for their dependable service, and they offer a free 60-day trial of their VoIP service (so you can test the user experience and call quality).

Why Would Someone Use a VoIP Number?

The use of digital phone lines has been quietly, steadily increasing across the country (and the rest of the world). Here are a few reasons why.

With phone hacking on the rise, many of us are looking to improve our security. VoIP makes it easy to add a secondary line to your cell—so you can stop sharing your personal number with people and companies you don’t completely trust.

Adaptation has been the name of the game the past few years, for businesses of all sizes. The VoIP phone number’s versatility has made it a remote work staple, allowing employees to stay connected from anywhere, on any device.

Cloud-based numbers don’t require any hardware (other than your existing cell phone), and they run on the internet you already pay for. This makes them far less expensive than most cellular and landline services.

How Can I Get a VoIP Number?

Start by determining the type of service you need—whether that’s a scalable phone system for your business or just a second number app to protect your privacy. Pinpointing the features you’re looking for (beyond just talk and text) will help you find a plan that works for you.

But at minimum: look for a provider that offers unlimited talk and text, a universally-compatible app (or online portal), and a free customer support number. These basics should be offered at a flat monthly rate—less than $20 a month—with no mandatory contract or add-on fees.

Once you’ve confirmed the provider offers a good value on the essentials, ask about other elements that might be important to you, such as call forwarding, visual voicemail or the ability to add lines as your company grows.

No matter which provider you go with—take your VoIP number for a test run and see how it fits before you print your business cards.